The Power of Prana

the nature of consciousness

As this nature of God to expand becomes active, as the first expression into relative existence, prana becomes the life force or vital force in all things. When consciousness assumes the role of prana, existence comes into being and evolves. Prana is the life force of creation, expansion and evolution.

Shakti is the energy of consciousness, Shakti in a human being is called Kundalini, and prana is the aspect of Shakti that is the intelligent, organizing force that moves that energy into motion and moves energy into expansion. Shakti, Kundalini and Prana are one.

This force of prana pulsates, expanding and contracting; becoming grosser, denser and more concrete and then also becoming finer and subtler. It is the pulsation of life, the vibration and spanda of life, the in breath and out breath on an individual and cosmic level. Prana is the essential force of Cosmic Life.

Prana serves as the link between subject and object. Prana, by vibrating and being the life force of creative expansion, allows for the play of Consciousness and the multiplicity of creation to unfold. Prana is the power of Being that lies dormant within the unmanifested Being and emerges as the vibrating life force when creation begins. It assumes the role of both objective and subjective creation.

The universal, creative power, which is the nature of Being, generates Prana within itself. Prana springs forth from the Godhead, and then Being, because its nature is to expand, assumes the role of Prana. It is Prana that allows Being to become creation, with the purpose of the expansion of happiness and bliss. It is Prana that allows for the expansion of life into full remembrance of its divinity and oneness.

The vast ocean, simulated by the wind, appears as waves. Being, stimulated by its own nature, Prana, assumes a subjective role and appears as mind. So mind is like a wave on the ocean of Being. The Creative Intelligence of Being assumes the role of the creative and intelligent subjective mind.

But what is the wind? What is producing the wave of mind? It is Karma. So Prana, supplemented by the influence of Karma, is the mind. Mind is born of Karma and creates Karma. Karma is born of mind and creates mind. The seed produces a tree and the tree produces the seed. Karma from a past life is responsible for the mind’s identity in this life. The mind’s level of evolution is responsible for the karma being created.

Karma remains inert, unmanifested, without the life force of Prana. Inert Karma, supplemented by the life force, Prana, gives rise to the mind. So the mind is a combination of Prana and Karma. Through Prana, mind is connected to Being.

First there is pure, unmanifested Being, the impersonal aspect of God. Its nature is to manifest and create. In preparation to assume the role of creative intelligence, it vibrates and pure intelligence becomes intelligent, and pure consciousness becomes conscious. In doing this (becoming self-aware and vibrating) it becomes the personal aspect of God – creative intelligence. From this vibration as the life force, Being expresses as both unmanifest and manifest, subjective and objective aspects within itself.

The First Stage in the Process of Manifestation

Prana is the first stage in the process of manifestation and mind is the second stage. Reflected upon by karma, Prana gains individuality and subjectivity and appears in creation as the individual mind. The individual’s mind is a limited reflection of the unlimited cosmic mind of God – pure intelligence. So prana is the vibrational manifestation of the ocean of Being and mind is the reflection of universal intelligence on karma.

Before there was mind, there was karma. So there must have been a creation before this creation and that creation and dissolution is an eternal process. In creation, mind exists because there was a mind previously that created karma. The karmic influence continues to exist as the basis of the present mind. Creation comes from the seed of karma, latent in Being.

There are 2 realities at the root of creation: Being and karma. The impression of an experience in the mind of the actor is the finest influence of karma, very near the meeting point of Being and prana. It is at this plane, where Being becomes mind, that creation begins, and because of the finest impression of karma, prana assumes the role of mind. Immediately, the mechanics of the senses of perception arise to become the agents of the mind and allow evolution to happen. The nervous system and body arise. So in the process of creation there is Being, prana, mind, senses, nervous system and body. 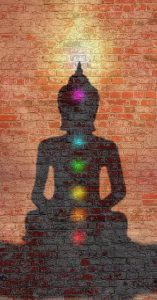 In a human, Being, Pure Consciousness, Shiva, is located in the crown of the head. Shakti, universal intelligent energy, Kundalini, is located at the base of the spine. It is the complete connection of the energy and the consciousness that produces enlightenment; the union of Shiva and Shakti. This occurs along the sushumna nadi, the subtle energetic channel that follows the spinal chord. This channel contains the 7 chakras or energy centers.

The energy at the base of the spine, the Kundalini, is dormant in most people. When activated, it moves upward, releasing blockages, dense smaskaras, and opens the path to the highest energy centers. This energy is prana moving from the base of the spine to the top of the head in the subtle body.

When life force freely flows, there is a natural unfolding of expansion, the creative and evolutionary acceleration of life into a greater awareness and alignment. When there is dissonance in the body or in your life it is as a result of a disruption in the flow of Prana. The cause of the disruption are negative or dense samskaras. Negative samskaras are dense, energetic, vibrationally non-aligned emotional content lodged within the subtle system. It is vibrational transformation that removes these blockages and allow the Prana to again flow freely. When the samskaras are resolved, this liberates the Prana-Shakti and restores equilibrium.

When prana, life force, is flowing sufficiently it opens you to higher experiences and dimensions. In most people there are too many dense samskaras to allow for a substantial flow of prana and most people who have had their Kundalini activated can experience only very small or short periods of the prana reaching the highest centers.

When the flow of prana is permanent from the lowest chakra to the highest chakras, then enlightenment occurs.

When the kundalini is awakened or activated the gross functions of Prana in the physical and subtle bodies becomes more subtle. When the Kundalini becomes fully operational the vayus or airs – the functioning of the Prana – continue to support the physical body, but also become energy moving through the nadis (subtle energy channels in the subtle body) that supports the path to enlightenment.

When Kundalini is awakened, the subtle Prana (out-breath) in the pingala nadi and subtle Apana (in-breath) in the ida nadi unite in the sushumna nadi. They become samana in the central channel. As this happens the mind quiets or becomes silent and the physical breath becomes shallower or stops. Samana then moves up the sushumna nadi as udana sakti – the upward bound energy. The udana sakti moves upward through the chakras. As the udana sakti reaches the 6th chakra this allows the experience of the Turia or Transcendental state. This also creates a state of bliss.

As the udana sakti moves through the chakras it purifies and resolves the energy of the samskaras, releasing them and opening the pathway that allows the experience of Samadhi.

Samadhi is absorption in the Self. It is the state where the individual mind becomes absorbed in Consciousness. The individual ‘I’ embodied in the mind is integrated into the eternal ‘I’ of God. All aspects – the mind, heart, ego, intellect, and subconscious – move into union and harmony in divinity. Samdahi is Turia, Transcendental Consciousness; both along with activity and without activity. It is the purified mind that reflects the Divine. It is Being. It is the reflection of the light of God.

The 3 pillars of vibrational transformation are activation, immersion and understanding. It is the repeated immersion in the divine energy and the momentary glimpses of Samadhi that form powerful impressions on the mind. As you return repeatedly to imprint that experience of Samadhi on your waking consciousness, then the remembrance and experience of that state becomes your natural experience. It is said that the imprints, the samskaras, are both your delusion and our liberation. In this case of repeated momentary experiences of Samadhi, samskaras become your liberation.

Every time Samadhi is experienced, even for the briefest second, the light of pure consciousness dissolves dense, negative and delusive samskaras and leaves a new impression of union. This allows you to return to the experience of the Self with greater ease. The impressions of Samadhi on the mind transform the mind from individual mind to pure Consciousness. Samadhi becomes both the means and the goal.

The final movement of Prana as udana sakti from the 6th chakra (ajna) and the 7th chakra (sahasrara) to the brahmarandhra (the top spiritual center) is accomplished when almost all negative samskaras are purified, the sushumna cleared of karmas, the chakras functioning openly, and the mind at peace and clear. When Prana reaches the brahmarandra the udana sakti becomes vyana sakti and allows the experience of Self-realization in Cosmic Consciousness and God Consciousness and allows it to expand into Unity and Brahman Consciousness. In Unity and Brahman Consciousness, the state of complete unity, there is only God. Inner and outer, the absolute and the relative, all merge into the oneness of God. All objective experiences then rest in the Self. Then one becomes Shiva merged with Sakti, Consciousness merged with power, Awareness merged with Prana – all merged as one.

Talks and courses designed to support you in living an awakened life, provide clarity around the nature of God and Self, and present a full understanding of enlightenment.